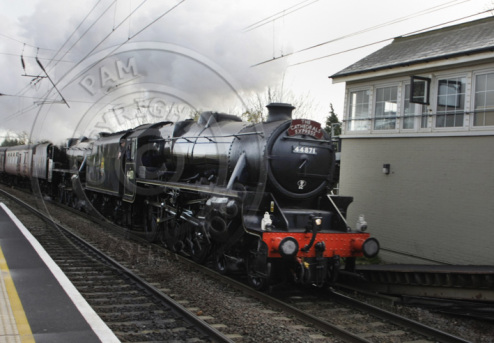 Steam Dreams, a Guildford based promoter of mainly steam hauled rail tours under the CathedralsExpress banner, has operated steam hauled trains on both rail routes from Southend for several years now. Many of these are routed over the Barking – Gospel Oak line including the Christmas specials.
This Saturday’s Christmas train from Southend East (09:09) to Winchester for the Christmas market, picking up at Upminster (09:39-09:41) and West Hampstead (10:40-10:42), is almost fully booked.
Ian Riley’s LMS Black 5 4-6-0, 45407 The Lancashire Fusilier, the loco was declared “fit to run” yesterday. 45407 is no stranger to the Barking – Gospel Oak Line, hauling the previous two Christmas Cathedrals
Express’s from Southend on 14th December 2013 and 6th December 2014. However, on those two occasions she was double heading the train, coupled ‘inside’ classmate 44871. This will be the first time she has hauled a train over the Barking – Gospel Oak line unassisted.

Last time it actually stopped at SoTo to change drivers. Uninformed me was on the wrong platform to chat to them.

but not good news – upgrades to the Barking-Gospel Oak line do not include extra carriages.

As picked up by RAIL magazine please note the wishful thinking in the very last paragraph. The 8 Class 172 diesel units are 2-CARRIAGES ONLY! TfL went out to tender for 3-carriage diesel trains in May 2012 but never placed the order, condemning passengers to ever worsening overcrowding which is now set to last until 2018.
Meanwhile Barking – Gospel Oak passengers have to endure 3 more years of intolerable overcrowding before the new trains arrive. If Network Rail complete electrification of the route on time in mid 2017, the diesel trains will running for a year underneath energised power cables which will only be used by occasional electrically hauled freight trains! END_OF_DOCUMENT_TOKEN_TO_BE_REPLACED